I first read about it several months ago; the intriguing idea of an Unschoolers' Day Off, a day where the goal would be one simple thing...to learn... - well, nothing.

Yes, nothing.  Nothing at all -all day long.  Not a whisper of any kind of information. Not the name of that bird at the feeder; not the scent of that fresh bloom; not how to skip or blow a bubble within a bubble or make toast or draw a tree or balance a checkbook or E=mc squared.  Not how to spell 'allosaurus' or what civilization is or a new route to the post office.  Not why the American flag has 50 stars, or what a slave ship smelled like, or what a doppleganger is, or 8 + 8 = 16, and so does 4 x 4.

I was drawn to the idea at once. It seemed like a juicy challenge, the kind of perception-twisting fun my family thrives on. I was still controlling some things, at that point, as I got my unschooling feet wet in the amazing waters of  Sandra Dodd 's seemingly endless galaxy of a website.

I didn't envision the changes that were in store for us, as we gradually rolled back restrictions on television and computer use, got cable, video games, and online pets; stopped pushing whole grains and vegetables constantly while proclaiming, "I will NEVER buy you Pop-tarts!" (note to self: never say never!), and started making monkey platters filled with an ever-widening array of food items, free to be eaten or not as mood or hunger decrees.

I had by then almost stopped my efforts to direct their lives toward my predetermined "learning experiences" and "teachable moments", stepped back, and began to learn myself - how to trust my children to learn what they need to live the life they want to live, moment by moment, how to watch closely, how to say "yes!" over and over, providing them with a richness and variety of experiences I never could have imagined, before then.

It's amazing how much work the rules and rituals and busy-ness of conventional family life make. I never realized, back when we lived in the world of "have to, must, and ought", just how unnecessary so much of it was. Suddenly, I had time - time to watch cartoons with the kids, play computer games, read, write, snuggle, stay as long as the kids wanted at playgrounds, libraries, wading pools, go to restaurants and performances, invite their cousin for a weekend....

July 24th was Learn Nothing Day. Time has become very fluid in our lives, so I will not claim the photos and details here are all "officially" from the 24 hours of that day. But they are from the span of time when we were most conscious of our learning...

At just about midnight, Jeremiah unveiled his Lego laser gun...it operates using a jewel or a golden key, and shoots golden tractor beams. 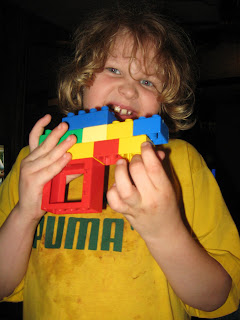 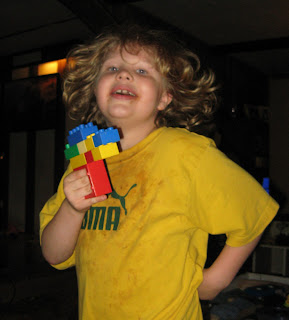 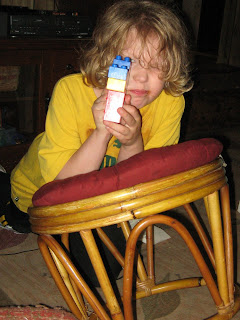 Annalise, meanwhile was sleeping on her bed (she often falls asleep elsewhere, but then gets up and goes to her bed, where she has always seemed most comfortable), resting and no doubt learning. Beside her is Koko the bedraggled gorilla, and behind her is one of her favorite books-of-the-moment, The Gas We Pass - The Story of Farts. The photo of her room testifies to the various types of learning that had been going on during the last hours. The area shown is her "office", where an astonishing variety of activities occur. 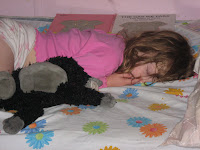 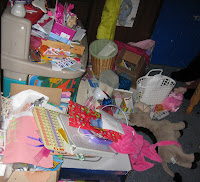 At 4am, Jeremiah and I were watching Naked Science together - the topic was the newly-discovered gene for tasting bitterness in broccoli and brussels sprouts. he was fascinated, and he was clearly learning as he asked about chromosomes, DNA, and other things that, since I was half-awake at the time, I don't fully remember. The last question he asked was how atoms stay together and what could be smaller than them?

After a "night's" rest (night being a very subjective concept in a home where every family member follows their own natural sleep/wake cycles, all of which differ), I took a picture of my little coquette by a bookshelf, and both children when they drifted off to watch cartoons...they love the ones on PBS, which are math or language or science-themed, so there was no hope learning could be avoided, there! 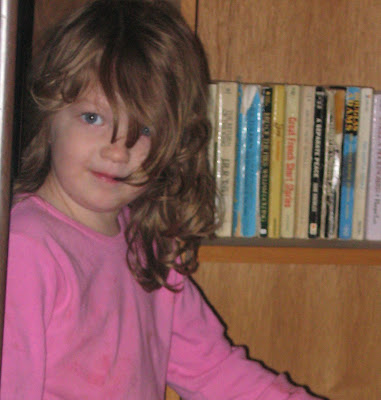 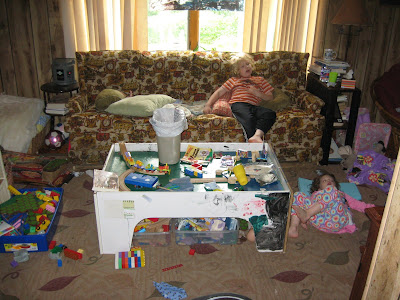 Somewhere in the course of the day, Annalise came to dress up in front of our mirrored closet doors...then to bring in her rocking chair and a box of treasures, and study a picture of her cousin... 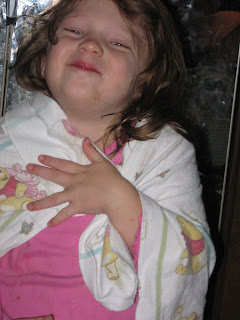 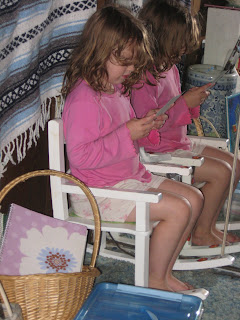 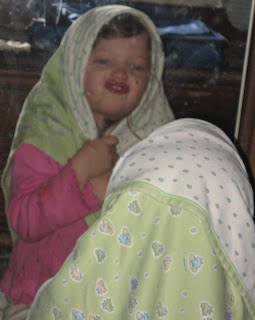 Learn Nothing Day happened to coincide with the annual appearance of the Mettawee River Theatre Company at the Philip Schuyler House. Schuyler was a pivotal figure in the Battles of Saratoga, but, since we were trying not to learn anything, I didn't mention the Revolutionary War connection to the children. Instead, we hurried to the place on the lawn where maybe a 100 others had already gathered (we were a bit late), and found a place to spread our blankets. We were lucky to find a spot near the cello. 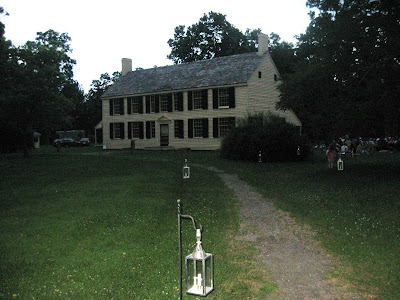 It was raining lightly, and, soon, crew were raising a canopy over the pair of musicians. Jeremiah asked why they got a cover and we didn't, so we talked about the effects of wet and damp on wood and on stringed instruments.

The play, Beyond The High Valley, was of Incan origin, a tale of a condor, a hummingbird, and a betrayed family. The music was Latin and lovely. The mosquitoes were abundant, and, of course, were followed by bats once the night fell...

The Schuyler House is part of Saratoga National Historical Park, and  predates in-home electricity. The company provided its own generator, but the path back to the parking area was lit with authentic lanterns - simple glass and brass holders with candles within. The kids got down on their bellies to study them, and played tag in the dark with a group of children.

Jeremiah noticed the sign which identified the house, its first owner, and his historical significance. A button in the center allows an audio narrative, and Jeremiah pushed it. I learned that Philip Schuyler's daughter had married Alexander Hamilton, and mentioned, forgetting myself for a moment, that he had been killed in a duel. 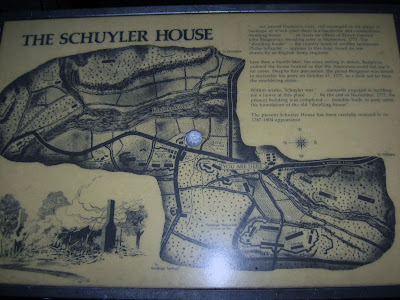 "What's a duel?" Jeremiah asked. I gave a sketchy description, since Annalise was tired and begging, "Can we go now?"

I'd mentioned guns, and he said, "Or with swords, right? Like I saw on Popeye." So even Popeye isn't safe, on Learn Nothing Day!

Back at home again, the kids drifted off to Lise's room, where they often enjoy elaborate games or just bouncing on her bed, since Jeremiah's loft doesn't allow for jumping. When I passed by, I found them playing games with the pattern block pieces... 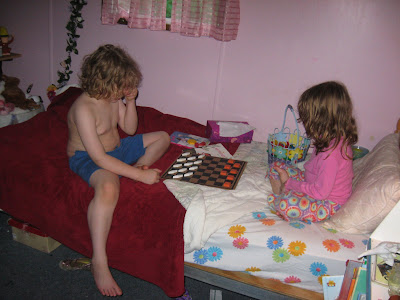 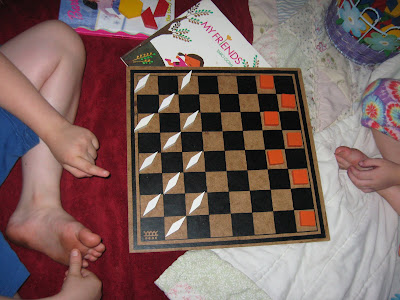 All this - and many more moments I just don't remember, because they came and went so quickly, or because the learning was a private matter I wasn't privy to - on a day where we were actively trying to avoid intentional learning.

Was the grand experiment a success, or an abject failure? I prefer not to think of it in those terms. It was a day when we were intimately aware of the learning held in each moment. That is a gift we will keep, a ripple spreading through the waters of our lives....


Posted by Shan Jeniah Burton at 1:14 AM