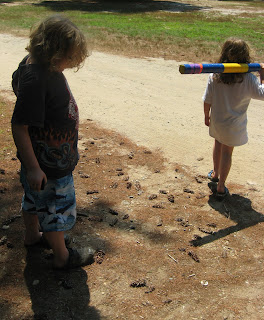 Lise heads out for a boffer battle while Miah looks on,
Unschoolers Rock the Campground II, Plymouth, MA, July 2010. 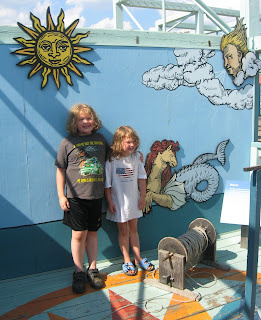 Checking out the entrance display before boarding
the Mayflower II. Jeremiah, almost 9, and Annalise,
who had just turned 6.

Yup, I am that Mom. You know the one. The one whose kids are always a little rumpled and scuffed looking. The one who isn't so very sheveled herself. 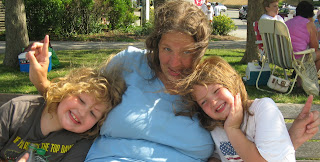 Maybe you know us, or another family like us. A family who seems utterly oblivious to the shabby public image they present, a family where those rumpled children walk up and engage you in conversation without any thought other than you will accept them as they are. You might even have wondered what their mother was thinking, why she let them go out in public like that, if she cares at all how others think about her kids, how she could be so neglectful about their appearance.

Since I am that Mom, I'll tell you. I am thinking of my beautiful, rumpled children with the mismatched, very well-worn clothing and the sparkling laughter bubbling out from their souls.

And I am thinking of the lake where we camped last weekend. I think of the pictures I have.....it is lovely, and picturesque. Attendants raked the beach clean daily; the shore was well tended.

When we ventured into the water, it was a very different place. There was a long, barely sloping floor. In some places, gritty sand was underfoot, littered with sharp rocks. In others, the surface below was a slimy, gooey thing, harboring ample growth of lake flora. Thermoclines brought shifting waves of warm and chill water. There was a rich, fertile smell, and, as evening drew on, there were occasional gentle bumps on my legs, as unseen fish tasted me. 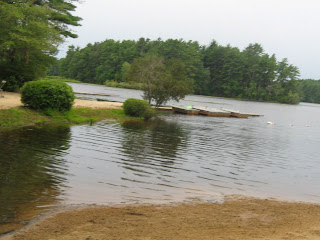 None of this shows from the surface. Neither does what is happening inside my rumpled and scuffed children. They are alive within themselves, and aware as few children seem to be, in this world. They know who they are, and the character of their souls, beneath the surface. They don't value themselves based on that surface - and neither do I.

My not quite 9 year old son, like so many boys of his age, doesn't care overmuch about being clean. When he's waited past my comfort zone, I might compel or coerce him into getting clean....but then, he would miss out on knowing the luxury of choosing to bathe or shower, of lingering and feeling himself relax into the peace warm water can bring. If I made a battle of it, he might never feel anything beyond the surface demands I made. I am that Mom who has no interest in robbing him of getting clean in his own way, in his own time, and feeling whatever he feels during the process. 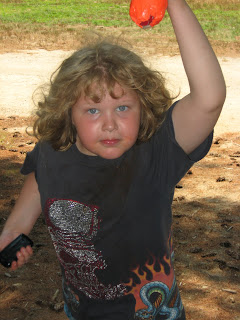 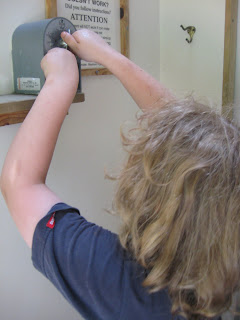 He loved the ecologically sensitive, coin-operated
shower at the campground.

My 6 year old daughter has, since she was able to move, expressed a strong interest in fashion. Her aesthetic is her own, and she certainly doesn't plan her wardrobe according to adult sensibilities. She often claims her brother's castoffs, and decorates herself purely for her own pleasure. She will dress up and preen before mirrors, posing without a trace of the self-deprecation so many girls are already living with, at her age. She values herself for herself, and wears clothing that reflects that self. If I made a battle of it, she might always question her right to freely express herself, in a way that could stretch to include a lot more than what she chooses to wear. Like so many girls before her, she might lose the freedom to own her own self-image, or even her self. I am that Mom who has no interest in robbing her of her sense of self, or the freedom to express that self in ways that please her. 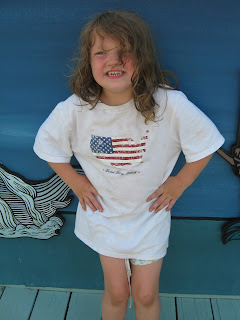 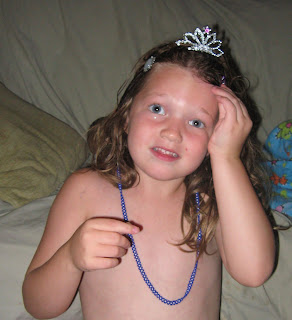 I am that Mom who looks at her rumpled, scuffed young ones, and sees the incredible depths of the life thriving beneath..... 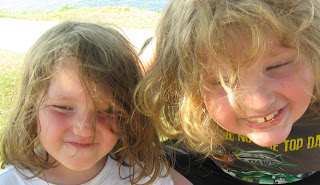 Joyously rumpled and scuffed before the wild Atlantic!!!!!
Posted by Shan Jeniah Burton at 12:39 AM

You are THAT mom! Glad you decided to participate!

You are THAT mom! Glad you decided to participate!

Wonderful. Thanks for joining in!

Your readers can click here and then read the comments section for links to 20+ other "I am that mom/dad" posts.

Yep, I'm that Mom too. I'm the one whose 9yo has lots of jeans with holes in them, and regularly wears the same clothes day and night for 4 to 7 days. Whose long hair often looks like he just woke from a nap following a wild party.

Thanks for pointing out that there's so much more gong on inside our rumpled kids than others folks see!

Ronnie - so cool you linked me up - I'm still getting the hang of this blog networking.....

I loved this idea - picking one thing that I have actually been criticized publicly for, and looking beneath the surface. And it is inspiring and buoying to read the Moms and Dads others are, and see my self or a better self I'd like to be reflected there.

Sylvia - Yup, that's Jeremiah to a T. His long blonde curls, like my darker ones, tend toward wildness (actually, we all tend toward wildness here!). He changes clothes only when HE is uncomfortable in them - very often, 4 or more days. He's not that keen on toothbrushing, either.

But when he decides to do these things, he really does immerse himself in the experience. After, he is thrilled to be clean and fresh again. I have no interest at all in taking that from him.

"not so sheveled herself" LOL

I love your analogy with the lake and I love how you let your kids shine!

Leave your link on my post so others can find you, too:
http://sumbthucker.tumblr.com/post/850235773/im-that-mom

Flo, I need to change some settings before it will let me. I will try to do that tomorrow. =)

your "rumpled" kids are gorgeous and you can tell they are loving life. I'm that mom too. not sure how I made it to your blog, but glad I did.

You have beautiful children, Shan. I was always that mom, too. The one whose kids had scuffed knees or the day's lunch on their shirts.
I figured they had the rest of their lives to worry about "what it looks like" so they may as well enjoy the short time they have as children.

Love it. I end up being that Mom a lot too. I look at dirt and rumpled clothes and crazy hair as evidence that my son has been having fun. Proof of childhood. That period is all too fleeting, so I let him embrace it fully. Good for you!

So sorry I just saw this!

Thank you,and I hope you've become that mom, too!

Sherri - I am so sorry I didn't see your post before now...

They are tidy more often these days, but still joyful and wonderful people. =)

I'm glad you made it here, too, and hope you will return!

Thank you! We happen to think they are beautiful, inside and out. We know we're biased, but -

I have taken a lot of flak from my white-sock and perfectly combed family of origin.

I say that the most important thing anyone can wear is a simple zest for an delight in living.

Both children currently have blue X's dyed into their hair, and that same sparkle in their eyes!

It makes me happy to hear from other Moms who raised or are raising rumply, tumbly, happy offspring. =D

Yes! Here, rumpled and cluttery is a great sign that living, learning, and fun are happening here.

Already, Jeremiah is growing up, starting to take at least a general interest in girls - which will almost certainly lead to less rumpledness...

These are fleeting times, and I love the beauty in their rumpledness!

Thanks for stopping by!