It is the Fourth of July, and the day is flowing fairly mellowly here...it's Wednesday, and Jim returned to work after his weekend. The kids and I have been tired. With lots of heat and a near full moon, all three of us were up until after 6am. Lise and I were up again somewhere around noon; Miah slept till about 5pm, and so is likely the best rested of the three of us. Lise had an hour or so nap last evening, so she also may well be better rested than I am.

Jim took the car, as we had no away from home plans for today. Lise began her day out in the yard. She's been interested in nature since she was tiny; this year, she is spending considerable time in practicing bird calls, watching and sometimes capturing insects, and mounting expeditions in our yard and the surrounding verges of woodland.

She is also very interested in bird nests this year, and in the process of raising baby birds.

There is a bush outside our narrow bathroom window that seems to invite a variety of birds, even though our Manx cat, Margot, a consummate huntress, often sleeps in the shade beneath it. Yesterday, Lise noticed that a nest had been built there - last week, I witnessed a mother bird (we aren't sure of what species, thus far) feeding a wide-mouthed and plump fledgling hunkered down on a branch.

Today, Lise brought in an old nest that she'd found sidewise in the bush, and reported that she'd seen eggs in the new nest.

She explored the nest, noting that there was plastic and a bit of tape and some bits of roofing material in the weaving. She wondered how birds create nests, when “all they have are wings and feet". I pointed out that they also have beaks, and that we could learn more about the hows if she wanted.

She added the nest to the other three we have collected over the last few years, and decided she'd like many more old nests, and a divided box to display them in. She also thought she might watch the new nest carefully, to see if she can collect any bits of shell when the eggs hatch (she found a portion of a robin's egg last week, which was a treasure).

We talked about Independence Day after Jim went to work, and I gave her the stickers we bought in Philadelphia last July, the day our car was towed from Market Street, while we were exploring Independence Hall, the Liberty Bell,  very old trees, a  hand-pumped well, and buildings...

She settled in the living room to watch Curious George on PBS- she had been going to play Animal Crossing on the Gamecube, and then Crayola First Ladies on the old desktop computer, but couldn't get either to work.

She went outside for a little while, until the heat drove her inside again, to play music on the desktop, which has an extensive selection - she listened to a harpist, and then found one of her favorites - Barbie Girl by Aqua. 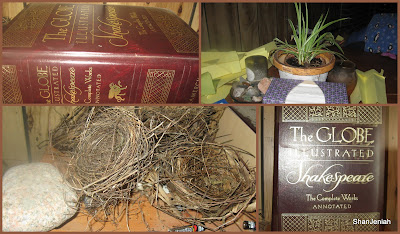 Around that time, Miah woke, and soon after asked me for the name of the singer who did "Cat's in the Cradle", a favorite song of his. I told him it was Harry Chapin; he said he knew how to spell Harry (he has a friend with that name), and so I just spelled Chapin for him. There was an attempt to reconnect the good external speakers; I think it failed.

A while later, we found ourselves in a conversation about how much cursive he can read - more now than a few months ago, but not, apparently, as much as he'd like. He asked me to make him an "English to cursive" dictionary in the notebook he and I use to exchange messages. After I did, he asked me to write him a message to decode, and wrote a few words himself.

During this time, Annalise asked, "Mom, how do you spell 'dominant'?" I spelled it, and she attempted to write it with her non-dominant hand, then proclaimed, "Nope. I guess my right hand really is the dominant one."

Somehow, the writing morphed into paper airplane making. Jeremiah decided to get a tape measure from the garage and fold his plane according to precise measurements. When the first plane or two wouldn't fly, I reminded them that we have a paper airplane book - generally, it appears in the winter months, and the kids and Jim enjoy hours of experimenting with it. I also noticed the protractor on my desk and gave a quick demo on how to use it, and it became part of their experimentation. 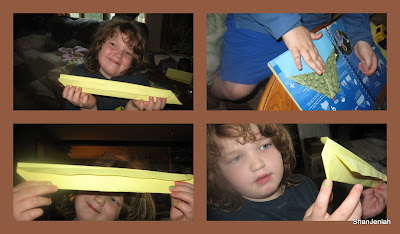 Miah was able to construct a plane that flew true. Annalise created the Twister 9000, which spun as it flew. She also adorned a plane with fringes - eventually, it fell apart.
It' s now not quite 10pm. The kids are watching fireworks through the window and tidying up a bit before Jim gets home. In this single summer day, we've had reading, writing, vocabulary, nature observation, specimen collecting, patriotism, music, measuring and angles, physics, art, technology, and social sciences.

It's worth noting that we didn't go into this day with any lesson plans, or of doing these specific things. They simply evolved and unrolled naturally, and largely without my direct involvement (I have spent my day in hometending, reading, writing, and just being with them when they wanted me to be...).

It's also worth mentioning that this has been a fairly typical day, here - although different things occur every day. All our days are rich in experience and learning, in ways that none of us could have planned or outlined beforehand. It's just the act of living, and doing so with presence and consciousness and freedom and curiosity.

Annalise just came to see if there is a better view from my window than the living room. "With the fireflies and the heat lightning," she said. "That made a perfect grand finale!"

And, in the wee small hours of Thursday morning, I sat with Jeremiah as he played Old Man Baby and Werebox online. Werebox, in particular, impressed me – it seems ideally suited for Miah's physics-oriented brain – and just as certainly ill-suited to mine, which tangled at the mere thought of trying to deduce how to move the items to achieve the goal...

I am left feeling remarkably blessed and grateful that we have found this way of living, that the learning rolls out and through all of our days, richer and deeper and wider – and far, far more personally relevant to them, as people - than anything I could have imagined, much less planned.