It's been quite an exciting ride, for me, since I started rowing.

Are you still confused?  Then you might understand a little better how I'm feeling.

I am referring to A Round of Words in 80 days, or, more quickly said, ROW80 -  "The Writing Challenge that Knows You Have a Life'.


The premise is simple.  You come up with some writing-related (obviously or not) goals.  Any goals that suit you.  The only caveat is that they must be measurable goals, so that you can judge your progress (or, sometimes, lack thereof) as you go along.

You post updates (scheduled twice weekly, but no one comes to people's doors to flay them if they don't adhere to that schedule), and, if your goals aren't working for whatever reason, you are free to change them.

The challenge lasts 80 days, which allows life to be life, with all its entropy and wonder, and for us to be writers actually living that life instead of just sitting around chewing pens and tapping listlessly or frenetically at keyboards.

After "winning" NaNoWriMo last November, I thought it would be a snap to do this.  No frantic dash to squeeze time in anywhere I could; no ultimatum of 50,000 words in 30 days.  No worries that my first 36,000 could only very, very loosely be claimed as fiction, rather than a long series of childhood and relationship delving essays with shabbily tossed together fiction curtains in the windows.....

My first clue that this might just be something transformative came when I began considering what my goals ought to be.  What seemed like it should be a simple thing to decide -  wasn't.  I didn't want to squander the challenge and the opportunity it offered to finally and at last claim my writing life as valid and deeply essential to my being.  And I didn't want to overwhelm myself.

Finally, I decided to go to my thinking spot -  a very hot shower  - and come up with some goals in there.  I only have about 10 minutes of hot water, so there wouldn't be endless time for second-guessing my instincts.

It worked, and, a few hours later, I posted these goals..... .  I based them on my passion for writing, and my desire to reach out to more people who might find my writing meaningful in their own lives.  And on my desire to earn some money writing -  not as in get-rich quick. but as in a little extra money to tend to the needs and wants of my family, and to earn an income again (I haven't had one since Jeremiah was 5, and it would feel good to see checks coming in with my name on them again, even tiny little ones).  It would be money I earned -  doing what I'm passionate about. I also included a goal that would help me begin to publicize myself as a writer, because, if no one knows I'm doing it, they aren't very likely to read my words.

It didn't take long to begin to feel that this ROW80 thing was changing my life.  I wrote about that here, and here , and here , where life took over a bit, and I learned the true flexibility and beauty of ROW80 when life gets busy and expansive.


I learned that it's okay to float for a while, to be flexible, and to adapt. When life needs more of me, writing can do with less.


Learning those things really helped me to relax, to draw what there is to learn when life gets a little more hectic and unruly.  To allow myself the space to just be where I am, when I am.  That makes life a lot simpler to flow with, and, at the same time, it feeds my writing life, adding richness and diversity.


And so it goes....I regrouped after the activity, and posted this ROW80 update, next....and, during that time, I was reacquainting myself with the writing blog I had set up on Wordpress last summer, then immediately orphaned for several months.  The rest of the ROW80 posts are there: "Sima Garo Provides"; "Ascent of the First Peak", "New Vistas and Small Acts of Courage", "Our Floating Days", "Live Writing", "Expansion and Immersion", Wide Horizons", and "Owning It.".

As I wrote post after post, something strange began to happen.  Well, maybe not so strange, really, but also not what I was expecting....


People came to read what I had written.  That's been happening for a while, of course, but the people who had been reading were mostly people who knew me, in real life, or those who shared or were at least sympathetic to the philosophies of radical unschooling.  It wasn't surprising that some of them would find their way to this blog, especially as the network of unschooling families got stronger and stronger on Facebook, and we began meeting further-flung unschooling families in our daily lives....

And, given the fact that unschooling is based upon honoring passions and individual nature, it wasn't surprising that I garnered positive and supportive comments.  I'm not sure there is a gentler group of people out there to expose one's soft underbelly to.

But, in the weeks since I began my first ROW80 round, I have intentionally been offering my words and images to an increasingly diverse audience.  I can't assume, even on this patently unschooling blog, that all those who read will have even a basic understanding of unschooling principles.  I might be their very first exposure to this way of living with children.

And, still, the comments have been positive.

Because of ROW80, I have discovered and begun to explore a far wider range of writing possibilities than I had previously known existed.  I've begun joining challenges, campaigns, blog carnivals, blog hops, and blogfests.

In the last two or three weeks, people have  begun to find ME.  People I have never before heard of.  People who have read my words and found meaning and value in them.....

And not one of these people have ridiculed me, scorned my words, or pointed and laughed.

Given all the writing listed up there, all the places I have, so to speak, exposed my soul, offered up my creations, that last sentence might seem strange.

I was raised by parents, who, when I sang, would comment, "You can't carry a tune in a bucket." I see now that that wasn't true.  I sang as a child when I was one, and had much to learn.  But I have always had a feel for music, for rhythm, for mood and tune and heard notes.  While I am not likely to ever be offered a recording contract, I can sing in public -  even, as I did despite my terror, last summer at NEUC, in front of an audience - without embarrassing myself or making anyone's eardrums bleed.

When I told my parents that my dream was to write, but rejected my father's insistence that I should go to school for journalism on the grounds that what I wanted to write was not unbiased news, but essays that explored life from my own evolving perspective, and to write fiction, he said, derisively, "That's just a pipe dream!"

And yet, many years later, that is exactly what I am doing.  No, no one is paying me for it, at least not yet, but there are now 171 posts here, and another 27 at shanjeniah.

And people find value in my words, my ideas, my honest expressions of the depths I have discovered within myself, and in the challenges I delve in my writing.....


I'm still getting used to that fact.   Honestly, I am finding it a little bewildering, a little ego-building, a lot humbling and frightening.

I am finding that it fulfills me and honors my nature.  I was born to write; I'm happier when I'm writing.  I've known that for many years, now, although I haven't always honored that need within myself.

But it's more than that, for me.  I am even happier and more fulfilled when I am sharing what I write.

I am even happier when others take a moment or two to let me know that my offerings meant something to them.

This is why I write - to offer up what I think, feel, experience, learn, and thus far failed to learn, in the hope that it will touch others, and maybe shed light on their own personal journeys.

Just lately,as I widen my horizons and embrace myself as a writer -  no, more than that, as a human being with things to say and share, It'sself-acceptance seems to be showing up in myriad ways - not just in my writing, but throughout my life.

And I am starting to get the recognition I long craved, but was secretly afraid I didn't deserve...


It's taken me a while to step up and claim my award.  The last several days, I couldn't begin to finish this.  Jim was in a serious motorcycle accident Sunday night and has been in a hospital nearly an hour from our home since he was med-flighted there.

But I've had the award for longer than that.

The true culprit is, and has been fear, as it so often is.  Fear, and more of those ingrained beliefs I never asked for, but absorbed throughout my childhood.

Is it the fear of failing, of being rejected, of thinking I am not good enough?

Maybe.  A little, maybe.  But, with the steady recognition, with my new-found ability to offer my words to more and more people in more and more places proves that I'm willing, at least to an extent, to take that risk.

This is something far more insidious.  This is the fear of success.  The deep-rooted sense that there is something wrong with succeeding greatly, to claiming my skill with words.  The belief that it's indecent, somehow, to say that I have always been a vivid and passionate writer, and that I have become far better since I started writing from my soul, and stopped fussing about matters of "craft".

I can't say that I have moved beyond these things.  No.  I an just now noticing them, and I have far larger things to deal with just now.

But noticing is a beginning.  It makes me a bit braver, a bit more able to see that those old beliefs were a part of the minimization and humiliation that allowed the parental abuses that would still be occurring if I allowed them to.

I can say that I am going to go ahead, stand straight, and honor the judgment of these two writers I respect and admire, and the friend who has known me since we were four.

I am going to claim my award, because I deserve it.  I have laid bare my soul, and that is a brave thing to do.  I have laid it bare before friends and strangers.  I have simply stripped myself and offered myself up for whomever chooses to explore there.

Besides, I am pretty damned versatile.  In blogging, and in life. =) 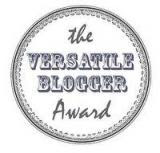 So, up there is my very first blogging award!  I had written nearly 200 posts, on two blogs and for over eight years.   I have spent many hours writing, editing, and learning about the process of blogging.

I earned this reward.  Honestly.  There's nothing wrong with saying so.  Nothing at all.

I earned this award.  And I earned it by offering to the world MY world, through my eyes, for them to use as they will.
It was given to me, freely, by two people who found some value in my offering. 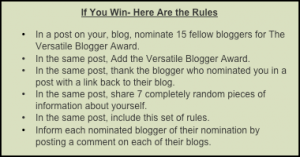 So, now, as you see, comes the part where I repay the honor by paying it forward....


I have chosen these blogs because I read at them often, and because each of them has been a tremendous resource of information, enlightenment, amusement, broadening, and deepening.

Three Random Facts About Me.....

Posted by Shan Jeniah Burton at 6:52 AM