Animals are a vital part of our unschooling experience - well, to be more accurate, they are a huge part of our lives here, especially for Annalise and I.

I have always had that passion.  My third word was "horse".  Many of my earliest memories include cats.

In so many ways, our children can reflect us - but they can also be like funhouse mirror reflections.  Annalise's third word was also "horse" -  but her first passion was for primates.  She flirted with several species, and then fell - and hard - for gorillas, sometime shortly before her second birthday

And gorillas it was, for nearly three years more.  Her favorite hero was Koko the signing gorilla.  From her, Annalise learned about compassion, interspecies relationships, sign language, that animals besides humans are capable of a great deal of intelligence, and that gorillas can be frightening when they're angry. She learned about gorillas in their natural habitats, King Kong, what 'endangered' and 'poaching' mean.

Because of her passion, we traveled to the Rosamond Gifford Zoo when she was three, and made our first stop the primate house.  Lots of primates, both ape and monkey, but no gorillas.  Annalise was enthralled, still, but wished she could see her giant friends.

When we were planning our trip to Washington D.C. when she was four, we were thrilled to learn that the National Zoo had gorillas, and orangutans too.  We found the gorillas first off, and were hugely impressed by the massive silverback who was picking blades of grass and sorting them meticulously with fingers and thumb. Then we watched the orangutans playing with blankets and climbing, swinging, and hanging on the "O-Line".  After that was a quick tour of assorted primate skulls and the Think Tank, where orangutan intelligence is explored. 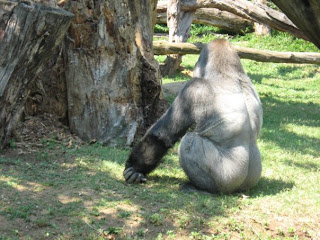 Shortly after this trip, Annalise discovered dolphins, via the video The New Adventures of Little Toot .  This led to talk of echolocation, dolphin and pelican diet and behaviors, volcanoes and typhoons, geography, learning theme music, choreographing dances and creating charts to help Jeremiah learn her dance.

She learned, too, how to make a very creditable dolphin call, and she has developed it since.

She also developed a love for Little Toot, and we found four of the classic, oit-of-print storybooks for her through EBay: Little Toot; Little Toot Through the Golden Gate; Little Toot on the Thames; and Little Toot on the Mississippi.  Through the books she learned about several geographic areas; ocean travel; types of boats; language no longer a part of daily American conversation, two-digit numbers (from the pages); cultural details; weather patterns; and history 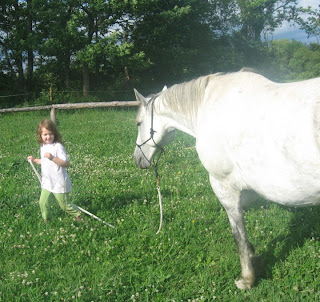 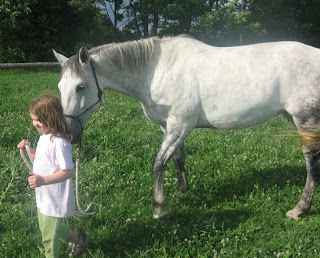 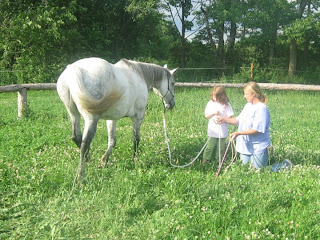 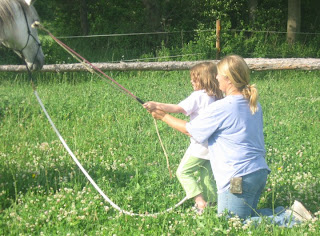 Somewhere around her fifth birthday, she fell in love with the animal that was my childhood passion - the horse.  With very little foreshadowing, it became, for her, all about horses.  She began collecting stick ponies and unicorns, and fashioning things she found around the house into makeshift horses she could ride - the laundry hamper was a popular favorite.

Because Kresney Kraft, a former classmate of mine, was developing her skill as a Parelli Natural Horsemanship Instructor, and wanted to develop a program for children, Annalise was offered several free lessons that summer. 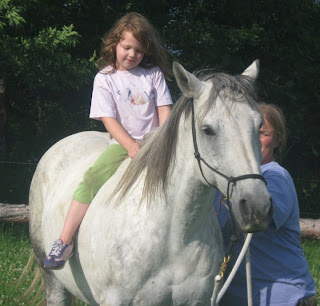 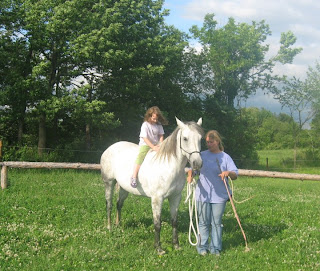 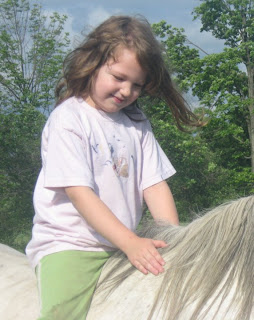 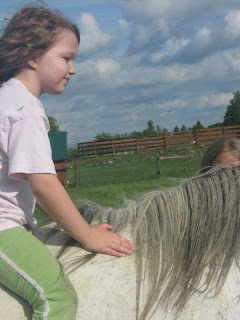 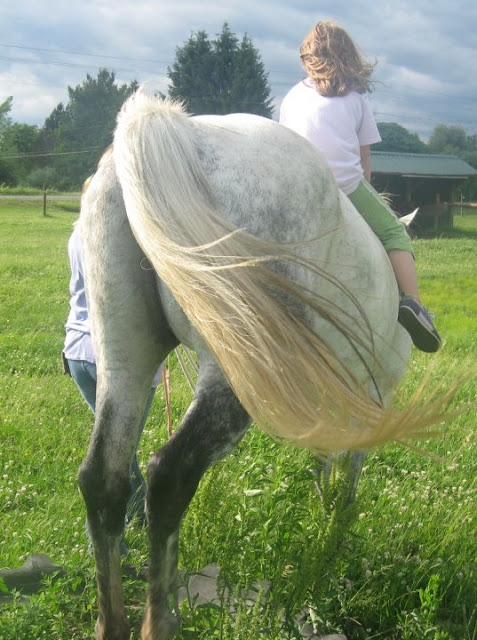 She learned what a horse's foot and toenail clippings looked like; how to put on bridles and fasten girth straps: how to lead a horse; the difference between approaching predatory and prey animals; how to guide a horse using a rope and a stick; how to play the friendly game; how to groom a horse; how to read equine body language.

And she learned a lot about riding.  This fascination spread outward.  She watched her Parelli video; a Swedish video, A Horse of Your Own ;and the 3-part PBS documentary series Cloud: Wild Stallion of the Rockies numerous times.  We read King of the Wind and portions of Black Beauty together, along with many other horse-themed books.

Over the past two years, Lise has become far more interested in building relationships with our pets, and other's pets, too.  She began by watching The Dog Whisperer, and applying those techniques to our dog, Corki, when she saw that I was having success doing the same (Corki is a
calm, submissive kind of guy, and genuinely enjoys doing what he's asked to do). 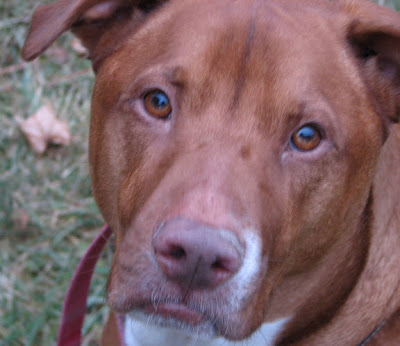 As their mutual affection grew, she learned about approaching dogs with good, calm energy and a sense of certainty rather than tentativeness.  She's grown, in that regard, to a place where she understands that forcing Corki to play with her when he's resting hurts their relationship, that kind and clear asking is rewarded more often than not with doggy exuberance to  please, and that there is an etiquette to introducing oneself to a new dog.  Just lately, she has been learning to walk Corki on the road, a big step for her,  She's learned that when she tends to his food and water needs, he looks more to her for affection and play. 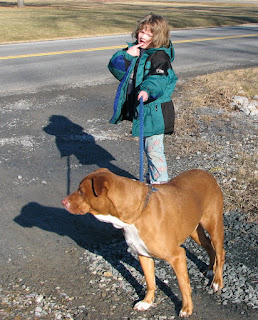 She's built a strong and friendly connection with our timid rescued Manx cat, Margot. Margot is shy and quiet and does not like too much excitement or rough handling.  Annalise tends to be an exuberant soul; she intentionally calms herself to be with the cat.


Over the past two years, Annalise has delighted in  observing the birds, wildlife, and insects in our rural area.  She has captured a succession of woolly bear caterpillars, built them habitats, fed them, and researched their habits; studied arachnids, and been a deciding factor in our family's choice to allow milkweed to grow freely in our flowerbed, so that monarch butterflies can lay their eggs there.  She has recently begun setting out birdseed in areas she has seen small birds congregating, and making pine cone feeders.  She delights in seeing deer, wild turkeys, and the occasional fox or raptor while we are traveling locally.
***
She has become an avid fan of nature documentaries.  She adores the National Geographic Kids Really Wild Animals DVD series, and Wild Kratts on PBS, but her interest is not limited to shows intended for children.  She has, in recent weeks, watched a series of YouTube videos on tickling various species and their reactions; the BBC's splendid Walking with Dinosaurs:Allosaurus, portions of the PBS series Ocean Giants;  episodes of the series Weird, True, and Freaky that featured various mutated animals and venom cures; and National Geographic's Creepy Creatures.
Annalise loves nonfiction books about animals, and has a growing library.  Topics include snakes, ants, termites, mastodont, horses, and a series of field guides on assorted species.

One of her favorite life experiences to date was the night when, under a full moon, she met Mission:Wolf lupine ambassadors Magpie and Zaeb, and wolf-dog cross Abraham.  We learned, she and I, how very vital apex predators like wolves are to any ecosystem, and the damage to all other plants, animals, and waterways when apex predators are eliminated.

She loves trips to local museums and nature centers, where she has met live owls and studied various bird wings atFive Rivers Nature Center; observed live otters and trout, smelled musk scents, walked nature trails,examined bone specimens, and learned about the bog ecosystem **The WILD! Center of the Museum of the Adirondacks.  She has delighted in assorted butterflies, tropical birds, and reptiles on a cols February day at The Butterfly Conservatory.

She has delighted in exploring tide pool ecosystems,watching live snakes feed, and in touching them, at the Children's Museum of Science and Technology.  She has met and interacted with llamas at Cherry Plain Sanctuary Farm.

Because her passion for animals is nourished and supported, Annalise has learned a tremendous amount about evolution, genetics, ecosystems, plant life, and the human animal.  She has learned to be gentle,kind, patient, and understanding with unfamiliar animals.  She has never lost her fascination and respect for the wild world that exists alongside, beneath, and tangled through the human-made, "civilized" veneer so often,  in these times, seen as the only reality there is.....