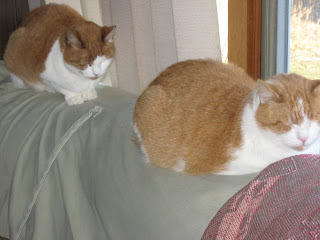 We adopted Shakespeare about two years ago, when a friend of a friend was moving, and his other option was the animal shelter. we knew nothing about him when we agreed to take him, other than that he had a really cool name. =)

When he arrived, he was fat. I don't mean chunky or burly or well-padded -this boy was so obese, his stomach rested on the floor each time he sat down. The previous owner said, "he's strictly horizontal...he doesn't jump up on anything." That I believed....the vertical lift required to jump was probably anatomically impossible.

Shortly after Shakespeare joined our family, we adopted Corki the pit bull mix puppy - a bundle of boundless fun who decided, right off, that Shakespeare was his own personal plaything. He'd already begun slimming down...running from Corki's too-sloppy love did the rest. He went from dangerously obese to really pudgy to husky...and then stayed there. He weighed 18 pounds the first time we took him to the vet...when we also learned he was about 12 years old and had a heart murmur.

Shakespeare was always more sedentary than our petite Manx, Margot (pictured her with him; they came to us at different times and in different ways, but looked very much alike, except for their size and Margot's lack of a tail). But he did enjoy exploring the brushline at the edge of our property, being with his dog, and getting love. Life had worn him down, and I think we were a little like a kitty retirement home, for him. He was content and comfortable (although he and Margot never did get much past simply tolerating each other).

Here in the rural, coyote-inhabited area we live in, we are used to not knowing what became of cats who go missing...so we thought, when, after a tired day, we didn't see Shakespeare again, that we ever would.

Last night, we found him in a secluded corner of the garage. He'd been there a while, and nature was taking its course. We asked the kids if they'd like to see him, and let them know that this brand of death isn't pretty, and they might not want to. both chose to, so Jim lifted them to a place where they could have a quick peek. I didn't really want to look, but felt I might regret it later, if I didn't see him (I still dream of cats who vanished without a trace in my childhood, sometimes).

Then Jim (our hero!) went with the kids to dig a grave near the bushes Shakespeare loved. Along the way, they speculated about what might have happened, and about rigor mortis and some particulars of decomposition. The kids have seen other dead things, but never one of our cats. But Jim answered their questions until they were satisfied, and then, together, at 11pm, we buried him and said goodbye. 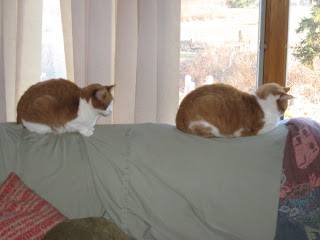 Today, Annalise decided to give her "Very Hungry Caterpillar" stick (which she painted herself a few weeks ago) to Shakespeare as a grave marker. Jeremiah decorated a tongue depressor, but misplaced it and decided he didn't need to put it there right away. So we went to the backyard after jim went to work, and after I checked that nothing had dug him up in the night (one look was a way to find closure; more could easily be traumatic - Lise is prone to vivid dreams, and dreamed of him last night).

We spoke some little words, and put Lise's stick lightly into the ground (hadn't thought to bring a shovel); will set it deeper on Monday, when the kids have planed a funeral for him. Actually, what Jeremiah said was, "What's that called, Mom, when you celebrate someone's dying? A funeral? Let's have one for Shakespeare." we picked some flowers from the brushline - purple ones, which, in our family, mean "I love you", and white ones, which the kids decided mean goodbye. We found a pretty maple leaf, red-edged, near his grave, and Lise picked up some dry brown leaves. We took a few pictures...Lise was crying some, and Miah was a bit unnerved, so that was it.

It's nice that he see something in death to be celebrated. So many adults never learn to see it that way...

So on Monday there will be a funeral. I asked the kids to think of what they might like to do, and we are buying ghost cookies and ghost Peeps. We'll eat some, and put one of each on his grave, "because Shakespeare is a ghost now".