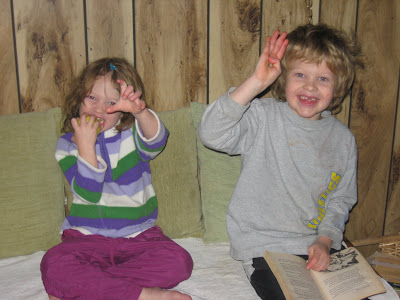 Two moments stood out in my mind when I read today's blogpost challenge topic. One was a moment from last winter, and the other much more recent, more along the lines of a revelation, whereas the first was a pleasant, wandering musing....

When I checked the date on the musing, though, I found I posted it in early December of 2008, so it isn't legitimately a 2009 moment, which means it doesn't "qualify" for the challenge. No matter; I can share it as my Wednesday (or late Tuesday, perhaps), gratitude.

That leaves me with this moment of peace...

A couple of weeks ago, before I went to bed, I tended our fire, as I often do when I am the last one awake. Annalise was already asleep in her bed, Jim in ours, and Jeremiah in the papasan chair in the living room, close to both the Tv and the fire.

I finished my firekeeping, and turned to go to bed, stopping for a moment to survey the current round of chaos which blanketed the room I'd had tidy only hours before.

Often, doing this type of thing right before bed sends me there discouraged, deflated, and fatigued in spirit.

Lately, though, I have been questioning all my assumptions that our home (where we very seldom have company) needs to be perpetually company-ready. I've been practicing increasing my tolerance for the childrens' many, many daily creative pursuits, and the resultant clutter that goes with them. Living an unschooling life is big and exciting and joyful and peaceful - and, here, it's also messy!

And, in that small, magical moment, standing with the woodstove warming my back, I had a sudden revelation as all these bits of living coalesced...

Somewhere, in my sleepy mind, that refrain I used to hear so loudly, "What a big mess!" was transformed, and I found myself grinning in the dimly lit room, as the fire threw shadows around, thinking, "What a big YES!!!" 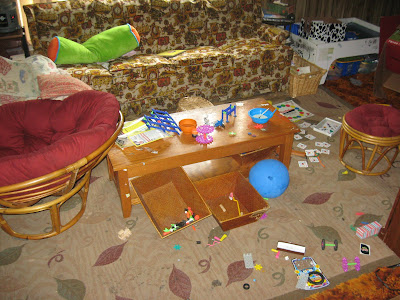 Saying yes is at the very heart of unschooling. Saying yes not only to our children, our spouse, even ourselves...And then that moment - where I suddenly saw the remains of our day not as chaos or a mess, but just as what was left of what we had done, the freedom our life, free of school, free of arbitrary rules and expectations, free of that adversarial relationship shared by most parents and children. 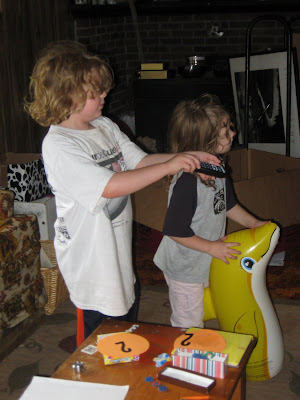 I noticed, too, that while I have been busy grumbling about all the mess, "the BIG MESS!", the mess itself has been gradually getting smaller (as have I; hmmmm). I've been, more and more, using the energy that would have been spent chivvying, threatening, or punishing the children for the huge misdeed of being themselves to do what never had occurred to me, in those days. I've just been DOING the cleaning I feel I need to do each day to maintain safety and my own sanity. It sounds so simple and basic, but, for me, it was a huge challenge. It still is, in some ways, and may always be. 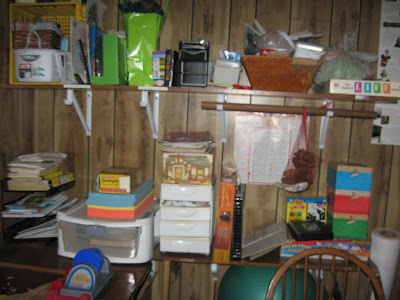 But that does not mean I have to inflict my challenges on the rest of my family.

There was a night recently - perhaps it was this one; or perhaps another. I really don't quite remember - when, failing sleep and in the midst of a hot flash, I got up and used the restless, potentially grouchy energy to tidy the front rooms of our home, because I have noticed that the morning goes so much better when I am not dreading or feeling trapped by the mess I know is awaiting me.

These moments have brought me a deep sense of peace, of having a perspective that embraces both my own peace and that of my family, as well...Where I used to think I needed the space kept to my standards, letting go of that and seeing it as the space where our family lives has been intensely liberating. And seeing the children as fully-fledged members of our family, rather than latecoming addons we get to boss around and demand things of in a way we would never dream of speaking to an adult has helped immensely, too.

I am often occupied with the revelation, in the moment. I'm still pretty new to this life where there just seem to be more and more possibilities around each corner. But, after, in addition to the high-voltage smile, I feel the way you do after a big exhale - the kind that fully empties the lungs, and erases all stress and tension. For moments after, or sometimes days, I am left with the feeling that anything and everything is possible, that I need only to be attentive and await the answers I seek, spirit open to receive them. I am energized and replenished, to the core, by the freedom of the realization.

I can accept our life as it is. I can clean the house, until I can feel at ease in it. And there are a world of other choices, just waiting to be discovered and explored.... 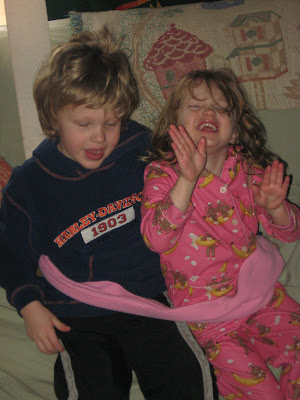