It used to be that being forced to share a car was a nightmare in logistics, wasted time, and general angst for all involved. We'd avoid car-sharing, Jim and I, at all costs.

I'm not going to lie and say it's become such a glorious experience that we now are selling a car and sharing permanently (although we've toyed with the idea, and what we could do with the moey saved on upkeep for the second).

But we also weren't (and never were!) forced into it. Circumstances made it the easiest way for all of us to live as we wished over the last few weeks, and, for the first time, it wasn't an odious inconvenience at all.

On days when the kids and I had no concrete plans for Jim's work hours, he took the car and we just hung out at home, doing home things. There was a certain magic in knowing we couldn't go far. Annalise got a new-to-her bicycle at a yard sale, and spent hours practicing pedaling inside, outside, and on the road. Jeremiah recently got a Game Boy Advance and then a Pokemon cartridge, and has spent many hours engaged in training, trading, and battling. Home days are fun for me, too, because I enjoy moving between happy times spent with one or both of the children, being included in their private and sibling worlds; time spent in increasingly joyful service to my family...in this season, getting out warmer clothes, putting away cooler clothes, moving firewood and chopping kindling, lawn maintenance and pre-winter yard cleanup, cleaning inside, organizing loosely for the long indoor months and holidays to come, laundry, dishes...it's a busy season full of the energy of transition; and time spent reading (mostly unschooling stuff), and writing (mostly unschooling stuff, with a little fanfic for spicing things up). On home days, Jim comes home to a tidier, happier home full of people eager to have him back. we're all relaxed, and tickles and laughter inevitably follow.

The days we car-share are different. We live in a rural area, and Jim works in a rural area. I tend to get wrapped up, sometimes, in all those things I think we need to get done. I'm too busy checking things off on an internal, seemingly urgent to-do list to actually remember that I am in the company of two of the most truly fascinating people I know (and I've made it a lifetime project, collecting fascinating people).

This is something I've recently become aware of, and something I very much want to change in myself. to that end, I've been consciously adding more fun times for the children lately, and, on this Thursday, after our weekly trip to our credit union, I'd planned a trip to Friendly's - a regional family restaurant-ice cream chain and the thrift store.

When the kids said they didn't want to do those things I was surprised. "It's too cold for ice cream, and I have too much stuff in my bedroom already, which is why it's so messy," said Annalise. Jeremiah added, "I don't want anything today. I have enough stuff."

Feeling a little rudderless, I said, "OK". And, as they chattered away in the backseat, I wondered what to fill the time with. 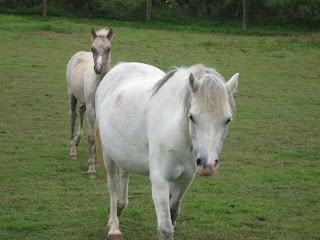 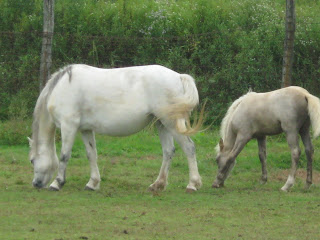 There is a small pony farm along the way, and I spotted this mare and foal in a pasture by themselves. I turned around and pulled over by the side of the road, and Annalise and I got out, spending about 10 minutes talking to them, feeding them grass over the fence, and petting Mom's head (little daughter would not come close enough to touch, preferring to watch us from a distance). I took pictures. Jeremiah was happy to stay in the car and play Pokemon - he was in the midst of a flurry of learning about game play, and happy not to talk to anyone for a bit.

The afterglow of the ponies held us all the way to the credit union, a long and sometimes tedious trip from Jim's workplace...there, although they usually head for the lollipops and treasure chest of toys, they did neither. We were gone again before I realized it.

After the business was done, we stopped at McDonald's for lunch, because they had the Barbie compacts in the Happy Meals. On the way home, we were detoured one of the kids' favorite playgrounds - one which is a little out of our way, generally. I thought first, "I should bring them here someday. They'll love it." Then I remembered my goal of being more present, and said, " Hey, Guys, do you want to go to the playground?" They were overjoyed...I need to remember to add more spontaneous playgrounds and the like into our lives. Their joy, after all, feeds mine.

Annalise was away at once, spying a slightly younger girl and opening with, "Do you wanna be friends?" Jeremiah hung back at the car for a few minutes longer...we'd arrived in the midst of a fierce battle, and he couldn't pause without losing the game.

Lise, in her typical daring fashion, tested her personal limits on assorted playground equipment. Jeremiah spent most of his time playing virtual battles. There was a time, a very short time ago, when i would have forbidden the Game Boy on the playground, so that the trip "wasn't wasted." But Jeremiah wasn't wasting his time. He was clearly having a wonderful time, sitting in the warm sun, with his little sister happily distracted. I moved between them, taking pictures and playing....and simply enjoying being with my two beautiful children as they expressed their uniques selves without inhibition. I even had a few moments to read a bit....

It was a good day, and, when we were home again, we each drifted effortlessly into our own rhythm....Lise was ready to nap, so I tucked her in, then went to listen while Jeremiah made his new robot car. Then, with both kids settled and content, I went about a bit of home maintenance, and a couple more photographs...

It was, all in all, just another sparkling, beautiful, picture-perfect Thursday in our lives.... 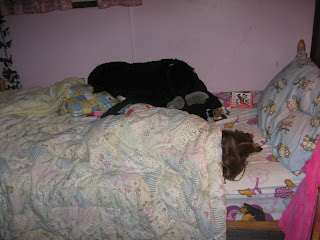 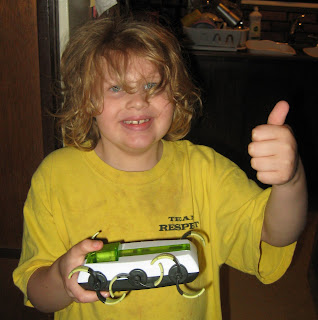